“This is a great news for all of us that Community Radio is now in existence in Bangladesh!”-said Mr. Aminul Islam, Secretary of National Regulatory Committee on Community Radio and Joint Secretary (Broadcasting) of Ministry of Information  while speaking as Chief Guest of the inaugural session in 5th Knowledge Sharing Workshop at JATRI Auditorium, Dhaka on 22nd December . 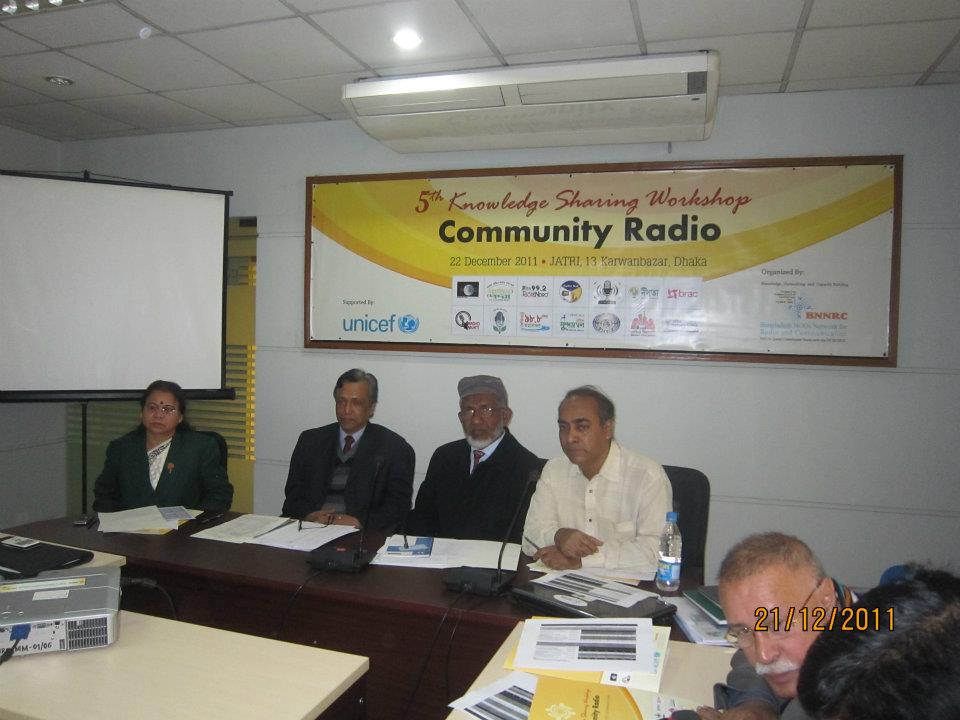 The event was organized by Bangladesh NGOs Network for Radio and Communication (BNNRC) in collaboration with UNICEF-Bangladesh under its partnership project on “Empowering Communities: Strengthening and Building Capacity of the Community Radio in Bangladesh”. Among others, Ms.Reba Rani Saha, Deputy Secretary (Radio), Ministry of Information and Sayeeedul Haque Milki, Communication Specialist and the focal person for Community Radio at UNICEF-Bangladesh attended as special guests of the session.Mr.Rafiqul Alam, Chairperson of BNNRC Board of Trustees and Executive Director, Dwip Unnayan Sangstha presided over the session.

Mr.Aminul Islam mentioned that through Community Radio broadcasting in the coming years the  commitment of present govt.will be fulfilled. Ministry of Information approved the 10-year Community radio Strategy which will accelerate the process of implementing the long-term vision of the govt.He thanked UNICEF-Bangladesh for their support throughout the formulation and approval process of the strategy. He expected that Community Radio would create a sensation for development in rural areas of Bangladesh. Facilitated by Mr.A.H.M Bazlur Rahman, CEO of BNNRC, he informed:”upto this date 05 Radio Stations are now running on regular broadcasting, 06 stations are on test transmission and 03 stations (Radio Naf, Radio Bikrampur and Radio Sundarban) are still in preparatory stage.”

By expressing greetings and solidarity in her speech as special guest Reva Rani Saha thanked the initiators and expected that community radio would be able to furnish the need of the disadvantaged rural community. She also thanked the sincere efforts of the organizers to take special initiatives to involve the women and children listeners around the CR Stations. She reminded the deadline for those initiators (who lagged behind) on 31st December 2011 and that there would be no further extension for them. Responding on the presentations, in his brief comment as special guest, Mr.Sayeedul Haque Milky of UNICEF Bangladesh made a quick flashback on the beginning of capacity building efforts of CR initiators, which has now become a reality through their existence and vibrant presentations. He also suggested to give more attention to involve disadvantaged children and the community in their programs. He reiterated UNICEF future plan to work for the growth and capacity development in this sector.

The second session of the event was graced by the presence of Syed Margub Morshed, Retd.Secretary and former Chairman of Bangladesh Telecommunication Regulatory Commission(BTRC) as Chief Guest. On his presence, representatives of Radio Barendra and Radio Naf presented their progress and performance. By taking part in discussion Mr.Shameem Reza, Associate Professor, Mass Communication and Journalism Dept.,Dhaka University and Mr.Salim Samad, Eminant journalist and Representative, Reporters without Border(RSF) emphasized on sustainability, community ownership and undue influence of the rulers in power . Mr. S M Shameem Reza advised to think of the ownership transfer plan of the stations (to community) from the beginning. He mentioned thinking of the technology aspect of the radio operators as well.

In his inspiring speech as Chief Guest of the 2nd session Mr.Syed Margub Morshed told:”CR movement is a journey, not a destination. We have to be prepared for future road blocks and to grow in number. “Responding on Community ownership discussion he added: Community will be our strength. Their ownership would be taken place through a gradual process, gradually community people will come forward and the initiating organization will go behind, the rear part. In this journey and process, we need forum like BNNRC.” He assured his future cooperation and solidarity in this movement.

In his brief speech as Chairperson of the session/s Mr.Rafiqul Alam reminded of his war days as freedom fighter when how a small radio station like Swadhin Bangla Betar Kendra-was a source of inspiration for them. He pointed that CR initiators should give more attention to livelihood and poverty reduction aspects. Since Disaster, land rights and free flow of information all are interlinked factors; the radio program design should incorporate these with high priority.

After the lunch break, there was a brief presentation on “Ist AMARC Asia Pacific Community Radio Training Forum” jointly by CEO of BNNRC and Mr. Milky (of UNICEF-Bangladesh), who joined the program at Thailand few days back. Discussion continued upto 5 p.m. among the CR initiators on evolving issues like formation of CR Club, Development Advertisement, IPR, Broadcasting of National News, Training Needs Assessment for 2012,Short Code for each Station(from BTRC) etc..

Mr. AH.M Bazlur Rahman, facilitator of the day-long event instantly responded to different queries from the initiators. He announced to organize a regional summit of Community Radio in February and requested cooperation from all. He also requested all to plan from now on to observe World Radio Day on the 13th February 2012 in a festive manner. 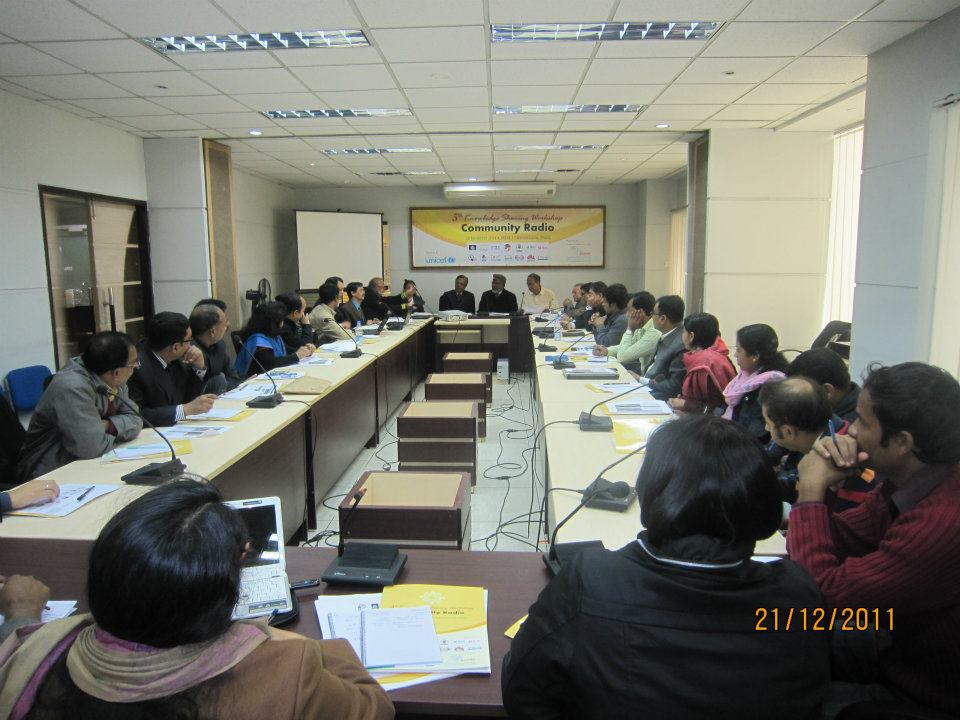 Representatives of CDMP project of UNDP,  BBC World Service trust, Katalyst, Information Officer of US Embassy at Dhaka Mr.Mobassher Hasan, Radio Engineer Mr.Sohel Aurangzeb-all joined in the workshop and expressed their solidarity in the future growth and exploration of Community Radio sector in the country.