The 1113 km2 Sagarmatha (Mt. Everest) National Park and Bufer Zone is located in northeastern Nepal in the Solu Khumbu District of Sagarmatha Zone.  The park is roughly triangular in shape and bounded by mountain peaks in excess of 6000 m, including the world’s highest, Mt. Everest at 8835 m.  Khumbu is the home of approximately 3,500 Sherpa people, formerly agro-pastoralists and traders whose economies are now dominated by the adventure tourism trade (trekking and climbing). Changing precipitation patterns and increasing temperatures are the two main drivers of climate change impacts, and recent studies have suggested that the Khumbu region is particularly vulnerable because of its extreme topography, remoteness, lack of transportation facilities, and tourist-dependent economies.

Changing and irregular precipitation patterns have resulted in reduced access to freshwater for household use and for tourist lodges, the latter exacerbated by the added demands imposed by flush toilets and hot showers.  Agricultural productivity and hydropower generation have also declined.  In response, rainwater harvesting technologies are being increasingly utilized by lodge owners and private individuals; methods to reduce water consumption are being tested by lodges; and new septic systems are being encouraged in order to decrease the growing contamination of existing streams and watercourses. Likewise, a new water system for three villages--Namche, Kunde, and Khumjung—is being constructed with funding from the Government of India that will pipe water in from the Kyalo glacier, more than 8 km away.  All of these recent projects illustrate the fact that people are actively adapting to climate change.  However, some of the measures now being used to obtain sufficient freshwater supplies are comparatively extreme (e.g., the Kyalo water project) compared to the situation only a decade ago.

A second driver of climate change impacts has been rising temperatures, particularly since the 1970s, that has resulted in the disappearance of hundreds of small glaciers at lower altitudes (<5000 m).  Many larger, debris-covered glaciers have receded, leaving behind large glacial lakes that present the possibility of damaging glacial lake outburst floods.  Imja glacial lake, perhaps the most studied glacial lake in the Himalayas, has recently been targeted by the United Nations Development Programme/Nepal (UNDP/Nepal) for a pilot risk reduction project that proposes to lower the lake by 3 m.  Studies conducted by the High Mountains Adaptation Partnership project[1] (HiMAP), however, have concluded that the lake will need to be lowered by 20 m to effectively reduce its risk of an outburst flood.  These and other research results conducted by HiMAP field scientists since May, 2012 will be presented at the 7-9 October, 2013 Inception Workshop for the UNDP/Nepal project, “Community Based Glacier Lake Outburst and Flood Risk Reduction in Nepal.”

As a compliment to its National Adaptation Programme of Action (NAPA) planning process, the Government of Nepal (GON) has developed a national framework for Local Adaptation Plans for Action (LAPA) to integrate climate change adaptation into local development planning and climate-smart development. The aim is to (a) enable communities to understand the consequences of climate change, (b) to determine adaptation options and priorities, and to (b) implement flexible climate-resilient adaptation plans. The GON and USAID expect that the LAPAs will provide a mechanism to mainstream climate change adaptation into the development agenda of local government bodies.  The LAPA’s seven-step process to produce includes:

As part of the HiMAP program in Nepal, LAPA community consultations have been conducted on a regular basis throughout the Khumbu region since September, 2012.  The consultations begin with the provision of introductory information to local communities on climate change sensitization, including key concepts such as the identification of assets, vulnerabilities, adaptation mechanisms, and priority adaptation project fun funding and implementation.  Results of HiMAP’s recent scientific studies of Imja Lake (e.g., ground penetrating radar (GPR) surveys, bathymetric surveys, flood modeling, and risk reduction strategies) have also been presented to local communities during the consultations.  This sharing of scientific information, as well as its integration into the overall LAPA design process, has been a deliberate effort to reverse the contemporary trends of scientists excluding local communities from their research activities, and more specifically in sharing the results.  Community stakeholders have also been kept informed of the forthcoming UNDP glacial lake and flood risk reduction project in order to facilitate communications and dialogue.  A series of final consultations will be held in September-October 2013, with completion of the final LAPA expected by December 2013.  The implementation and monitoring of priority adaptation projects is expected to commence in the spring of 2014.

The Khumbu HiMAP work is also being enriched by project’s focus on international collaboration and exchanges of expertise between specialists from the Himalayas, Andes, Central Asia, European Alps, and other mountainous regions.  Peruvian glacial lake risk reduction specialists, for example, participated in the September, 2011 Andean-Asian Glacial Lake Expedition to Imja glacial lake in the Mt. Everest region of Nepal, sharing their more than 50 years of experience in the control and management of potentially dangerous glacial lakes with their Nepali, Bhutanese, and other international counterparts.  In July, 2013, more than 60 scientists and field practitioners spent 10 days in the Cordillera Blanca of Peru at the HiMAP Glacial Flooding and Disaster Risk Management Knowledge Exchange and Field Training workshop, presenting state of the art papers, learning new field methods, and spending three days trekking to Lake Palcacocha, perhaps Peru’s most dangerous and potentially unstable glacial lake.  Knowledge exchange, funding opportunities, and information dissemination are further encouraged through  HiMAP’sCommunity of Practice of more than 125 high mountain specialists, as well as through its regularly updated webpage and online library. 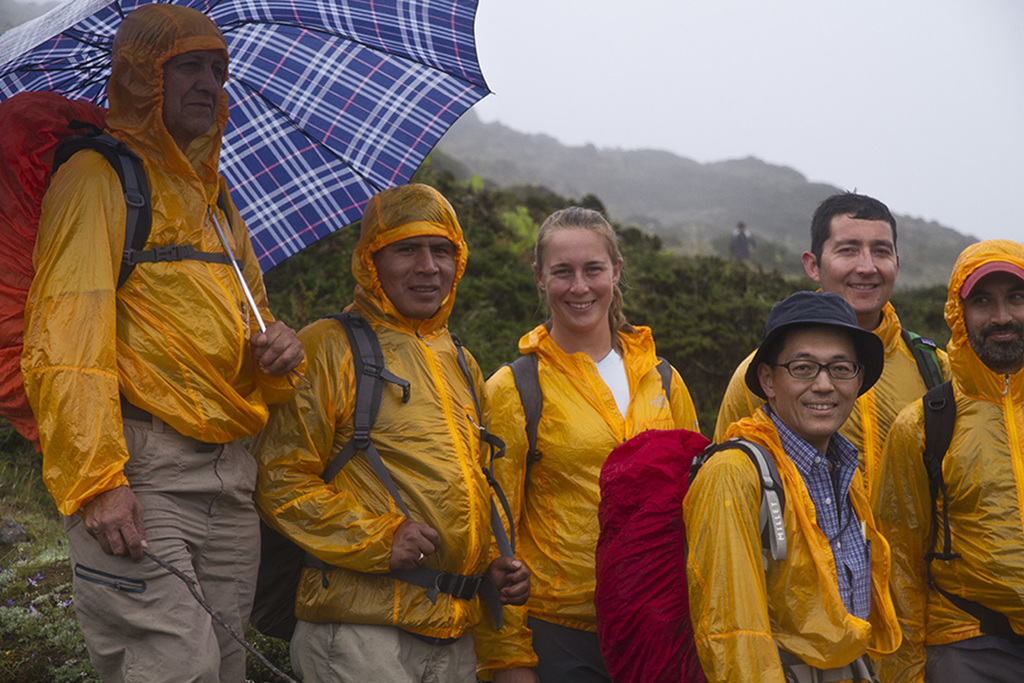 Peruvian and International Scientists in Nepal , 2011

[1] Funded by the U.S. Agency for International Development.