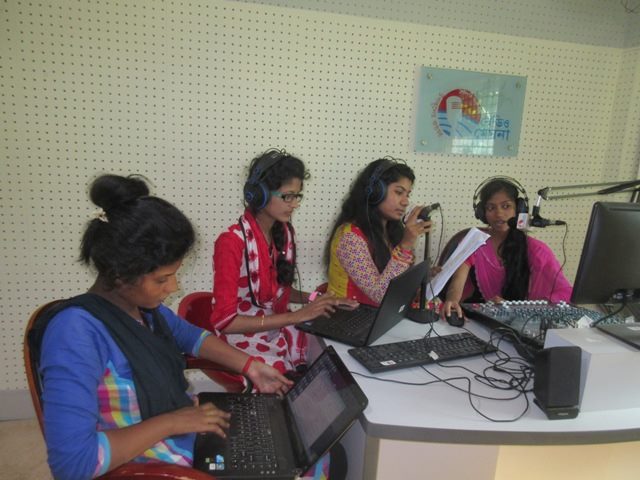 In spite of the social and religious barriers such scenario in gender disparity, particularly in media, has been gradually changing. Bangladesh NGOs Network for Radio and Communication (BNNRC) under the banner of ‘voices of the rural people,’ has been in the forefront in breaking the traditional biased focus towards urban areas. The organization, since 2000, played a leading role in bringing media’s focus on rural areas. Community Radio, being the only broadcasting media in rural Bangladesh not only broke the traditions but also spearheaded in creating a platform for women journalists from grassroots to raise their voices to be heard in the community. Because of their empowerment majority of the programmes of the women friendly community radio stations are designed for the most marginalized people of the society – women. In Bangladesh now 16 community radio stations are on air in the country aiming to ensure empowerment and right to information for the rural community. They are broadcasting a total of 125 hours program per day on information, education, local entertainment and development motivation activities. Around 5.6 million people are listening the programs. A total of 1000 broadcasters are now working with those stations throughout the country; half of them are women.

The community media fellows reach to the remote locations and collect information on the lives of women and children and prepare their news and programs. One woman feels comfort to talk and disclose the facts with another woman of her neighborhood. Through the reports, many untold stories have been brought into light. They are contributing in development and changes of their own community lives by their programs and reports on protection of early marriage, promotion of education and other important issues of mother and children. Parents and social elites became sensitized and in some community radio station areas they have collaborated to immediately stop the cases of child marriages. The youth women fellows have earned prestige and recognition in the rural community through this program. Some of the parents now show interest to push their young daughters to engage in community media and journalism. It is encouraging that 22 fellows are continuing their service support with Community radio stations.

With her radio station-radio Naf, Hla Hla Yee Rakhaine is also working as district correspondent of a popular weekly newspaper. Mentionable that, she is the only women journalist the area has ever produced. Some other fellows like Sanjita Kaochar Sopnil of Radio Bikrampur, Shahrina Jui and Hoimonti Mou of Borendro radio, Samia Akhtar of Radio Mahananda, Humaira Parvin Hena of Radio Chilmari , Abida Sultana of Lokobetar -all are working in their radio stations as full-time producers. A proud and confident voice of Sharmin Sultana of Radio Pollikontho, broadcast from north-eastern district of Moulvibazaar since 2012, said, “It is an amazing feeling that I conduct programmes, interact live with guests and also respond to our audience requests for dialogues on health, women, human rights, social injustice, education, agriculture and many more issues. When we began we had only one programme on women issues, now there we run five programmes a week exclusively dedicated for women.” Sultana

While female journalists are facing numerous challenges even at national level, it was not easy for the youth women to work as journalists at grassroots level. “Youth women in community media” was itself a very new idea, so it was truly challenging to introduce at local/rural level.Challeneges not only came from the families of the selected fellows; it was hard to convince even the community radio stations. There were challenges in every single step of implementation. A fellow journalist said, “It is a very challenging job in a rural conservative society. People in this part of the world have different views on young unmarried girls. Men dominated society expects us to stay indoors. In spite of many social restrictions, we still stand up to work outdoor and that too, with men till late in the evening.”By facing all those challenges, the program is running successfully under the coordination of BNNRC. The fact is that the rural women are not at all the topics/subjects of news, but they are now producing news and writing reports in media. By creating opportunities for rural young women in media and journalism, fellowship program particularly encourages the equal opportunities for men and women in media. With the youth male, Young female journalists are sharing the positions of producers, anchors, newscasters, reporters and station managers of the 16 community radio stations.

Replies to This Discussion