I've been studying the Graham Durant-Law Social Network Analysis report (http://wiki.km4dev.org/AAR_SNA) for the IFAD funded studies synthesis.  The most striking graphic shows posts by year with a blue line suggesting to me that the number of posts were falling alarmingly: 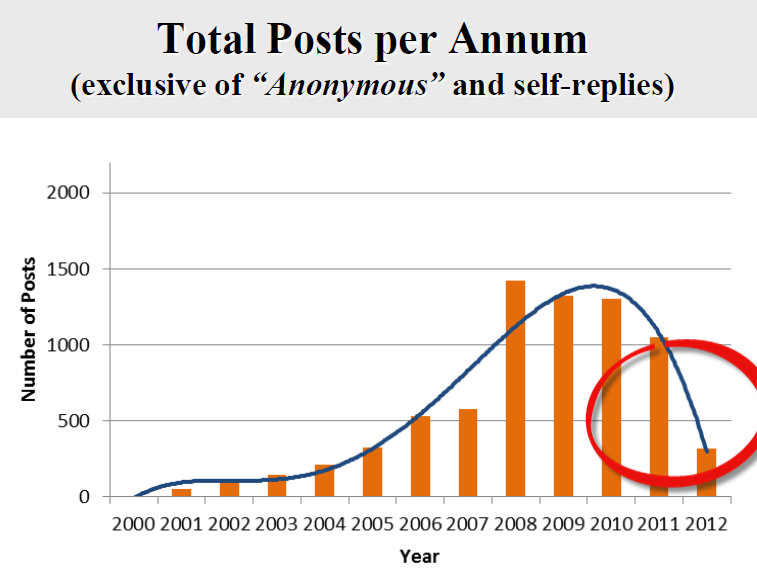 The big drop after 2010 made me think, "Oh maybe something really bad has happened -- rich and growing conversations in KM4Dev followed by people turning away from the community!"  I think that Durant-Law thought that there was a problem because he said in his conclusions: "Posting activity peaked in 2008, but has been in slow decline since." As I studied the other IFAD-funded studies, there was no hint that anybody else thought this might be the case.  Finally, I looked at the Excel spreadsheet with email headers from which this bar chart was derived.  It turns out that the dataset only contained messages from the first 2 months of 2012, so it's really not appropriate to compare 2012 and 2011.  The blue trend line implicitly treats them as comparable.

So I was relieved to think that the challenge for KM4Dev is to cope with its success, not with "success followed by a downturn, where people walk away from the community".

As I snooped around the Excel spread-sheet that Durant-Law used, I was struck by how much very meticulous work it took for him to clean it up so that it could be analyzed.  It's not as if "clean data, ready for analysis" is sitting around just waiting for us to look at.  Too bad, because it's an interesting dataset that he has produced and a larger community like KM4Dev could benefit from additional ways to look at its own interactions.

Here is an alternative formatting of the same data, suggesting that within the period of time represented in Durant-Law's dataset, the month with the highest posting was March 2010, not even in 2008. 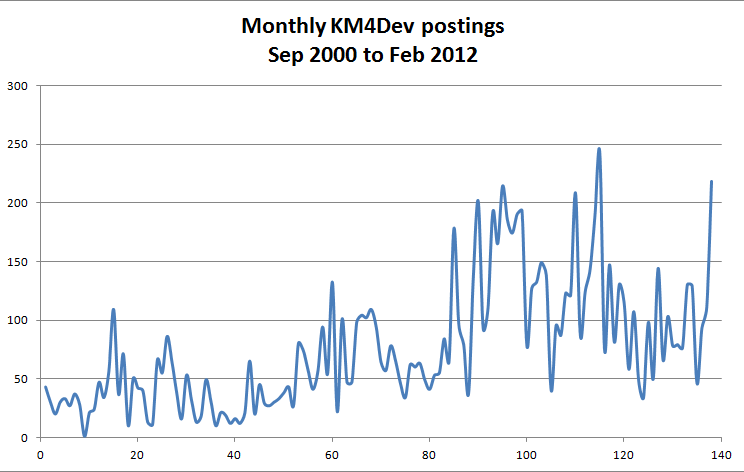 We have to be clear that the number of postings is a tricky measure.  It can suggest value and lively exchange, but it also implies a cost -- we may have to be more choosy as to which messages we read thoroughly, much less think about carefully!