„Knowledge Sharing around water management innovations
in the Andes and Himalayas“

The accelerated retreat of tropical mountain glaciers in the Bolivian Andes has increased fears about future water scarcity in the country’s highland regions. The existence and continued well-being of bofedales, high Andean peat bogs, plays a critical role, as they are at the same time centers of biodiversity, as well as the base for animals and human populations. Bofedales are at the very heart of high Andean life and culture.

In the following, we present an example of an innovative, integrated approach to water management and adaptation to climate change in high mountain regions, knit around the understanding of the functioning of bofedales and the role they play in a changing climate.

Studies from different regions of the world have shown that warming is more intense in high mountain regions than at lower altitudes. With the melting and future disappearance of glaciers, not only a cultural, historical and esthetical element of the landscape is lost, but also an important reservoir of sweet water at high elevation. Especially during the dry season the flow of glacial melt water has a big importance for biodiversity and ecosystems, guaranteeing an ecological minimum flow to rivers and wetlands.

A flock of alpacas in front of Milluni mine. Photo by Dirk Hoffmann

While at a first moment, melting glaciers are releasing an additional flow, once “peak water” is reached, this flow rapidly turns to a mere trickle. It is then that Andean ecosystems start depending entirely on rainfall.

It is now assumed that in the ever more limited presence, or absence of glaciers in many high mountain watersheds, peat bogs will become more important for their water storage capacity. To maintain ecosystem productivity, it seems therefore essential to maintain the existing peat bogs in size and functioning. It is not well understood, however, to what a degree these bofedales themselves are going to be impacted by glacier retreat and climate change.

The Tuni Condoriri region covers an area of approximately 730 km², and is part of the Cordillera Real in Bolivia’s Eastern Andean mountain chain, with heights going up to over 6,000 meters. It is home not only to a unique high mountain biodiversity, but also to numerous indigenous Aymara communities that have practiced livestock herding and subsistence agriculture for centuries.

Bordering the dry Altiplano, Tuni Condoriri is characterized by glacierized mountain tops, steep cliffs and deep valleys formed by the last ice ages, where wetlands provide year-around water supply and fodder production for wild and domestic animals. It is for those reasons, that Tuni Condoriri has been declared a National Park as early as 1942, even though until today the area has never seen any park management installed.

In the study region’s high mountains, livelihoods are centered around livestock herding, mainly of two types of camelids, llamas and alpacas, which in turn depend on all-year-round availability of fodder. The rapid melting of mountain glaciers, in combination with changing precipitation patterns puts an additonal stress on mountain communities, already suffering from migration of the young to the nearby metropolitan area of La Paz-El Alto, and the influence of outside market forces.

It is in this context that the international multidisciplinary project “Modelling  BIOdiversity and land use interactions under changing glacial water availability in the Tropical High Andes” (Bio-THAW) was designed to provide science based model scenarios for climate change adaptation measures. The project aims at bridging the gap between science and traditional communities, in search of scientific insight and understanding, on the one hand, and looking for ways for mountain communities to adapt to a changing reality, on the other. 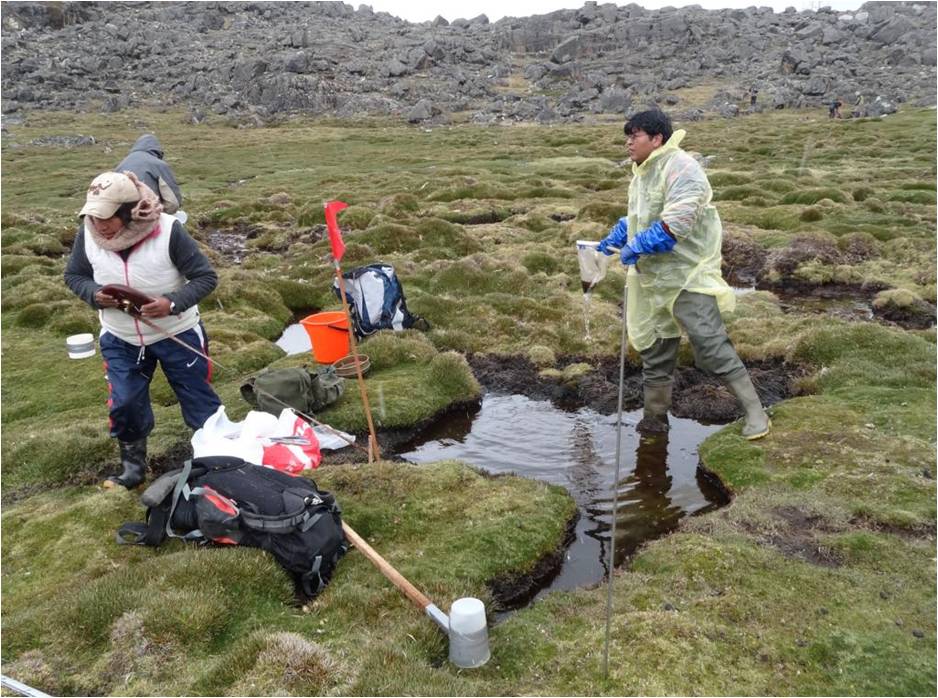 Bio-THAW is a “trans-disciplinary project involving a broad community of scientists and stakeholders, from anthropologists, sociologists, glaciologists, and ecologists to agent-based modellers, resource managers, and farmer communities”. Using both climate and socioeconomic scenarios, combined with satellite images, resulting models will provide criteria for the definition of conservation areas as a function of regional parameters such as glacier cover, wetland area or land use practices. At the same time, the project works very closely with local communities, in order that they become involved in the research and understand the implications of the results. Without local people recognizing the need to adapt, any (outside) attempts towards climate change adaptation measures will be futile.

At present, understanding and quantifying the importance of bofedales for mountain families and community’s livelihoods is the principle task of the project. The 120 families within the Tuni Condoriri area, which encompasses the valleys of Tuni, Codoriri, Milluni and Zongo, belong to four different communities: Alto Milluni, Botijlaca, Comunidad Tuni and Comunidad Condoriri. Observed weather patterns over the last few years leave little doubt that climate change is already under way; the regularity of the past seems to have been lost. During a series of field visits, measurements of water quality, local biodiversity and stream flow are being carried out parallel to interviews of local peasant families in order to understand their management practices and perceptions of the changing climate.

On the basis of the glacier melt and stream flow studies it will be possible to develop scenarios of the future state of the bofedales. Will they shrink in size, as some scientists fear, providing less fodder for llamas and alpacas? Such a reality would make adjustments in the management of high Andean wetlands necessary, even to the degree of discussing the construction of small dams in order to guarantee a year-round stable water flow to the bofedales.

In the next project phase, stakeholders will step into the public policy arena, to establish working links with local authorities.

A whole different approach to the management of the regions´ hydrological resources could be taken at a completely different level. The major part of the project region is part of the catchment area of the (state) water utility EPSAS (Empresa Pública y Social de Agua y Saneamiento), that maintains various artificial lake reservoirs and redirects most of the region’s water towards the twin city of La Paz and El Alto. At the same time, this area is part of Tuni Condoriri National   Park, that since its formal declaration in 1942 has never had a proper administration (see box for details).

The setting up of an effective management for this “paper park” would not only protect high Andean and Eastern slope Amazon biodiversity, but also help to protect the regions´ hydrological resources from continued contamination by mining activities, as is presently the case. At the same time, it would put the local population in a more protagonist role; peasant families could fulfil an important role as “cultural caretakers of the landscape”, continuing their traditional herding activities. This, however, is still a future vision.