Reporting out from the gender huddle... 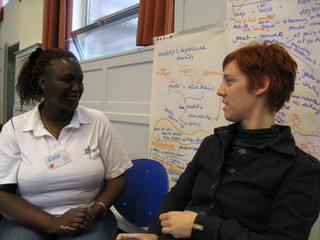 Who is outspoken? Who is willing to learn?

Find these people, and it will be easier to do more gender-aware knowledge sharing. This is what I learnt from listening to Roselinie Murota, who works in Zimbabwe for SAFIRE, the Southern Alliance for Indigenous Resources, talking to Hannah. That's them talking on the right, and me writing it up below...

SAFIRE works on three broad themes... benefit driven natural resources management, food security and nutrition, and ICTs for development. They all link together: for example, the nutrition work focuses on ways indigenous foods can be prepared to ensure people who are HIV + get enough nutrients, and ICTs are used to help people get current market information for their produce so they can negotiate a fair price with wholesalers.


Gender-aware technology choices -- the treadle machines that were used to get oil from seeds were too tiring for women to use, given all the other things they had to get done in the day, so they changed them.


The introduction of a new honey harvesting technology, the Kenyan top bar hives, as traditional hives were high up in the trees, and women couldn't climb them in skirts


Opening telecentres in schools rather than in town centres: safer and more accessible for everyone 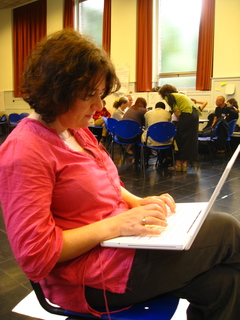 ... and other ways of what Hannah started calling 'uninvisibilising' gender and Rose said was 'going beyond the numbers'.

But it takes effort from everyone - some of the methods may be well-established (eg holding separate focus group sessions with men and women, and asking each group to rank their priorities) but that doesn't mean it's easy.

SAFIRE established 'technical teams' of people with expertise to share -- one for gender and one for ICTs, but also teams for HIV and AIDS, natural resource management, and nutrition. Each person chooses the group they think is the best fit for them. For the gender team, Rose said it was "all about attitude: you need to find who is outspoken, who is willing to learn". Which is a phrase I shall be taking away with me... I think it's the same for knowledge management: "everybody's job and nobody's".

In reality, reporting on gender aspects may only happen if someone chases it up, and although people might find that annoying, over time people incorporate it into the way they normally do things. At least, that's the intention...

Comment by Jo Lyon on October 8, 2009 at 11:52pm
And... if you want to see the video Hannah made of Rose explaining a bit more about her work while I was writing my blog post, you can see it here on YouTube. She took it on my camera, which, when I got home to Oxford today, inspired me to work out how to use iMovie to edit it (it needed to be rotated through 90 degrees!) and then upload to YouTube for the first time. I have been blogging for many years, but have never done stuff with video, so it was a great thing to learn how to do. And thanks to Rose and Hannah, it was a lot of fun!