The African Rice Center* has been very successful in transferring knowledge about how to process rice in a way that makes it more nutritious and has less breakage. In a study conducted in Benin, 92% of the 600 women farmers took up a new process for parboiling rice. That is an amazing percentage for the transfer of knowledge. But the real story is the remarkable way they accomplished the transfer.

I should note that in Benin parboiling rice is a major economic activity and generates income for women and girls. So an improvement in the process can result in a significant economic gain for women farmers.

The traditional method women farmers used to prepare the rice, was to soak the rice (paddy) for 12 hours, then drain and cook it in a small amount of water in the bottom of the pot. Unfortunately that allowed the paddy at the top to not be entirely steamed while the paddy at the bottom would be completely cooked. After cooking they then dried the paddy on the ground in the sun for some days. This traditional process resulted in an uneven product to mill and was often mixed with sand and stone from lying on the ground. Consequentially the rice was harder to cook and brought in less money when sold than would more evenly steamed rice, that had been dried with a different technique.

The African Rice Center had been using a conventional way to spread new agricultural practices, which was to teach farmer women to adopt a ready-made research output. And that is how they initially taught women farmers to parboil rice, using a ready-made perforated aluminum pot. To learn, the women farmers came 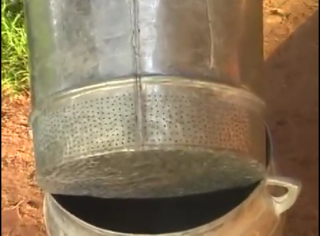 to the Center for a two-day community workshop during which experts from four local NGOs demonstrated how to parboil the rice using the perforated pot, as well as, learning techniques for washing and drying the rice. The typical uptake of that training was about 18%, which isn’t bad, but the African Rice Center knew that it was too slow to reach all the women farmers who could benefit from the better practices taught in the workshop.

The African Rice Center decided to try video to transfer the knowledge, thinking video could be easily distributed to more people. But they didn’t just make a video of the training they had been doing. Instead they developed the video using a participatory method they calledZooming-in and Zooming-out.

Zooming–in started with visiting communities where they listened to the learning needs of villagers. They especially paid attention to the words people used when talking about parboiling rice. They searched among the communities for local innovations in parboiling rice. Then rural men and women played an active role in identifying the ideas and principles that would be in the video and in preparing the video script. Finally the Center made a draft video showing the women farmers using their own innovations and describing what they were doing.

Zooming-out was about showing the draft video to more communities, which spurred even more innovations, which were then also incorporated into the video. The Center was also able to modify places in the draft video where the ideas were not clear. The video was then ready to be viewed.  Over time the video was translated into twenty African languages and was shown throughout central Benin in many different age meetings and markets, and was also distributed through partners of the National Agricultural Research Center. See the video at http://www.youtube.com/watch?v=bNUlsnIO_1A ;

After a period of two years, the Center conducted a study to assess how effective the video had been in transferring this improvement. The study included 600 women farmers in central Benin, that were divided into five categories, based on the extent of their exposure to the new way of parboiling rice; 1) those who only had the conventional training, 2) those who only saw the video, 3) those who saw the video and had the conventional training, 4) friends and neighbors who had neither training, but were able to observe what others were doing, and 5) those who had no new information about how to parboil rice.

The following chart shows the percent of women who changed their practice and innovated a way to parboil rice using local materials, as well as those who took up the associated practices (click on the chart to make it bigger) As I read about this amazing result, I puzzled about why it was so successful and I drew several conclusions - you will probably think of several more and I'd be interested in your thinking.

The data in row 3 show that watching the video increased the probability that the women farmers would innovate a solution for parboiling the rice, over the conventional training. The same is true in row four, reducing vapor loss by stuffing a cloth between the two containers. Video appears to stimulate more innovation that conventional training.

These conclusions can be generalized to other situations in which knowledge needs to be transferred, because nearly always a practice has to be modified to fit a different context. Too often what is said (or thought) by those that are being asked to take up the knowledge is, “We are not like them, so it won’t work here.” And they are not to be disparaged for such thinking - they are right, it will not work as it is presented.